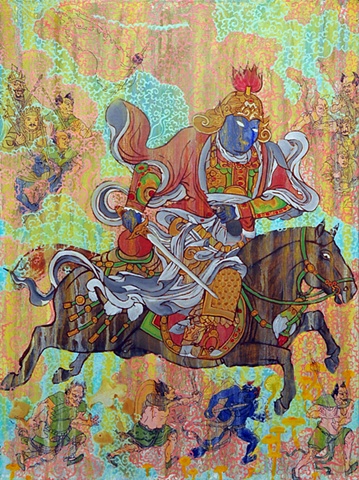 A dark blue skinned Kubera on the horse brandishes a sword and holds a mongoose spouting jewels from his mouth. Kubera is an emanation of Vaishravana, a guardian deity of the north and a god of wealth. The jewel-spouting mongoose symbolizes generosity as it conquers the snake, a symbol of greed and materialism. He rides triumphantly into the battle.

Around him in the clouds are the demon lords of the eight directions. Jambhala (east), Purnabhadra (south), Manibhadra (west), Dark Kubera (north), Samprajana (southeast), Guhyatana (southwest), Pancikaye (northwest), Picikundali (northeast). Scattered amongst these demon generals are their demon armies. They are smaller in scale then Kubera and are almost shrimped amongst the mushrooms below. In actuality they are gods themselves and are very large, Kubera being a veritable giant.

The foreground elements are painted in such a way to allow them to visually recede into the background. There is a faint recognition of a thicket of yellow bamboo in the mist. The background elements like the clouds are painted last , becoming the top most layer. The foreground and the character were painted first, although traditionally they are the last to be painted. Paint is let to drip freely to cover the earlier work and create a unique textured effect on Kubera and the horse. In this work I have reversed the traditional painting process and established hierarchy for a unique visual effect.