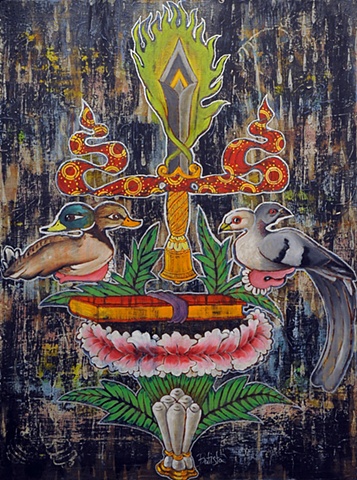 This painting depicts the emblems of three great bodhisattvas: the lotus, book and sword. The emblems are flanked by two double-headed birds which are an insignia of the early transmission of the Buddhist Teachings into Tibet. The birds are of western origin, the kind that you may see on any given day here in North America, ducks and doves. The two beaks and eyes facing in opposite directions represent the transmission of knowledge from east to west. Both birds contain one male and one female head combining both aspects of humankind.

This image includes representations of three important Buddhist figures. The Manushri is represented by the lotus-borne book of wisdom and his flaming sword which cuts through the darkness of ignorance. The bodhisattvas Vajrapani and Avalokitesvara are represented by the ducks to the left and the peaceful doves to the right. As a trinity these images symbolize the wisdom, power and compassion. These can also be represented as the body, speech and mind of an enlightened being.

In the background are hidden the seven gems or insignia of the Chakravartin. These include the unicorn or rhinoceros horn, interlinked square earrings, eight-branched corral, the queen’s round earrings, the cross gem insignia of the general, elephant tusks and the three eyed gems. They have been painted over in black to hide them and slightly sanded to barely reveal them.