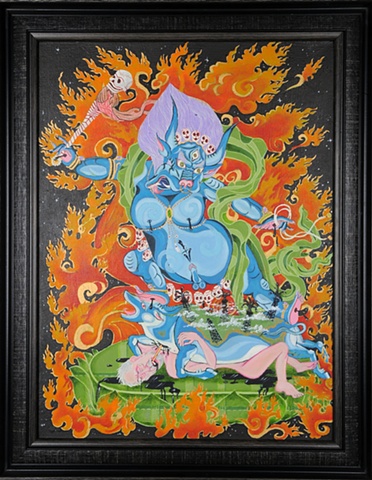 Yama, the Lord of Death, holds a lasso in his left hand and a skull headed club in his right. A green scarf flutters around his body delicately, echoing the colours of the lotus. Disorderly flames leap wildly around Yama’s blue body. In the darkness beyond is the creation of the entire universe.

Laying upon a lotus throne below is a male figure with pink fleshy skin and white hair. This old man drinks black liquid from the bull that weighs down above him. The bull represents the earth, underneath is the man, who attempts to rape the earth as he drinks and takes all he can. Meanwhile oil derricks suck out more black blood from the earth’s body. The earth is ravaged and appears to be screaming out for mercy. Black blood spills out over the edge of the lotus throne. This makes the god Yama furious, ready to strike.