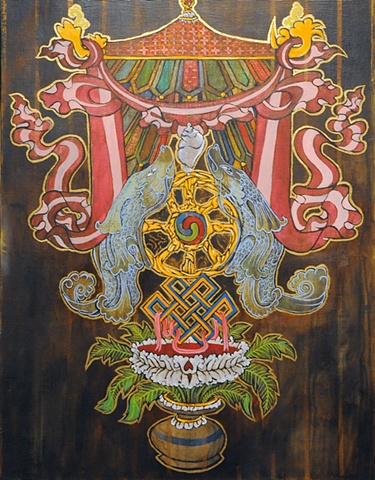 These symbols of good fortune represent the offerings made by the gods to the Buddha after he attained enlightenment. Brahma was the first to appear with the offering of a thousand-spoked golden wheel requesting Shakamuni (the Buddha) to turn the teaching wheel of the dharma. Indra, the sky god, then appeared presenting a white spiralling conch as a symbol of proclamation of the dharma. The earth Goddess, Sthavara, who bore witness to the Buddha’s enlightenment presented him with a treasure vase full of nectar of immortality.

The symbols later became to represent the eight precious vital organs of the Buddha’s body:parasol his spleen, the fishes his kidneys, the vase his stomach, the lotus his liver, the conch the gall bladder, the endless knot forms the intestines, the victory banner the lungs, and the wheel the heart.

Tibetan tradition identifies the symbols as forming the body of the Buddha; the parasol for his head, the golden fishes for his eyes, the lotus for his tongue, the treasure vase for his neck, the wheel for his feet, the victory banner for his body, the conch represents speech and the endless banner is his mind.