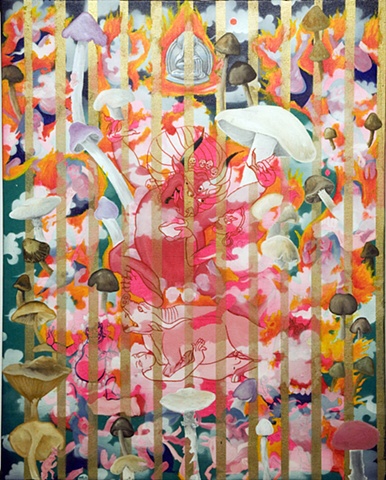 A fiery Buffalo headed Yama Dharmaraja is surrounded by flames and his demon helpers. He is the King of the Law and the Lord of Death, he is the judge at the gates of Hell. He is an important protector in Tibetan Buddhist Practice. He waves a bone headed club and a lasso. He glares at his consort as she straddles the bulls haunches. She offers him a skull full of demon blood elixir. He wears a necklace of moist severed heads. A bull copulates with the stricken fleshy body of ignorant life below his bellowing form. This horrific scene is a reminder of what may be in store at the gates of hell if one does not live a life of integrity.