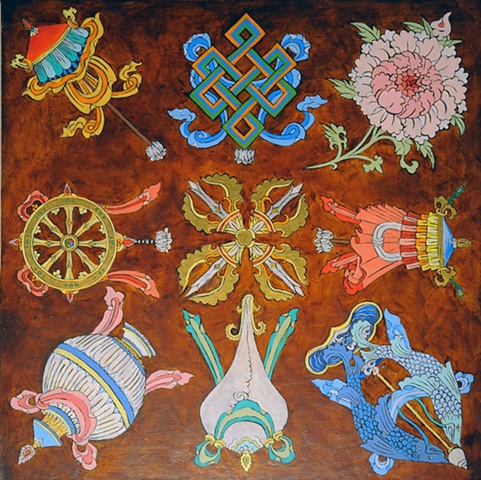 The crossed Vajra in the centre represents the principle of absolute stability. It is a ritual implement often held by deities. It means ‘mighty one’ and is often considered a powerful thunderbolt that can cut through illusion. Vajra also represent the diamond way. Essentially it symbolizes the impenetrable, immovable, immutable, indivisible, and indestructible state of enlightenment or Buddahood.

The parasol represents the protection of beings from harmful forces and illness. The parasol also protects those under it who take refuge in the dharma.

The golden fishes symbolize the auspiciousness of all sentient beings in a state of fearlessness without danger of drowning in the Samsaric Ocean of Suffering,

The vase or treasure urn represents health, longevity, wealth, prosperity, wisdom and the phenomenon of space.

The lotus which blossoms unstained from its watery mire is a symbol of purity, renunciation and divinity.

The spiraling conch shell represents the beautiful, deep, melodious, interpenetrating and pervasive sound of the dharma that awakens disciples from the deep slumber of ignorance and urges them to accomplish their own welfare and the welfare of others.

The endless knot represents the intertwining of wisdom and compassion.

The victory banner was a military standard of ancient Indian warfare, while later it became an emblem of the Vedic god of love and desire.

The wheel of law sometimes represents the Sakyamuni Buddha and the Dharma teaching, it also signifies the mandala and chakra.