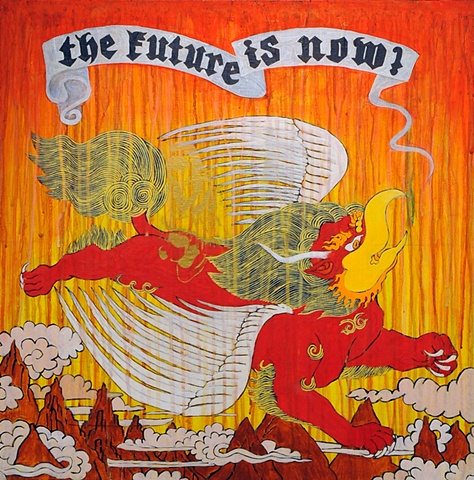 A Garuda-lion is a victorious creature of harmony. It is a mythical hybrid creature of Tibetan origin. Garuda-lion is created by mixing a lion with its traditional competitor, the Garuda bird. If this creature has a Western equivalent, it would be the griffin or gryphon. The writer Herodotus wrote that griffins lived on high Indian mountains where they dug for gold with their talons. Like Icarus, Garuda-lion reaches for the sky and confidently flies towards the sun.

Winged creatures often symbolize freedom and the lion represents bravery. The marriage of these elements into one mystical animal is to remind viewers to take a chance, a leap of faith. To have the bravery needed to grasp their dreams. Take the chance to leap up and fly, the future is now!