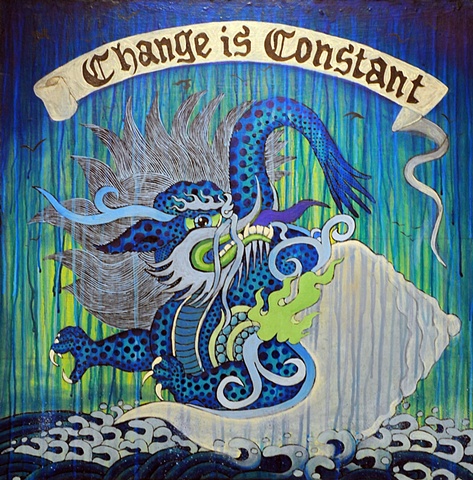 The Makara-snail is a union of a water monster most easily associated with a crocodile and its traditional prey: the conch or water snail. The water monster has horns, scales, tusk, mane, upturned snout, and two claws grasping from the shell. It closely resembles a hermit crab, which destroys the conch mollusk and takes over its shell as its new home. Life feeds on life and nature reminds us that change is constant like the ocean.

The overall painting is in cool hues, to evoke the feel of the deep ocean. The Makara thrusts itself fearlessly over a bed of waves. His talons grasp the air for stability. The cold waves ebb and flow but the Makara realizes that he cannot grasp or hold onto anything permanently. He has no control over nature and so proceeds confidently knowing that is the way of life. This image is intended to remind us that every moment is ever changing, when one wave rises another falls, just like emotions, opportunities, experiences etc. The only constant in life is change. Essay by Dunia Ilic

At first glance, I was struck by Brian Batista’s “Change is Constant” cool, quiet strength and masculinity. It is a striking oil and acrylic painting, depicting a mythical image of Makara-snail at the bottom of the ocean. The piece itself meticulously detailed with each individual hair and each individual drip of water revealed with care. Contrasting the measured and detailed brush strokes, paint is also freely splattered and let to drip from the top of the painting. Inspired by the Tibetan thangkas (scroll paintings); the painting is purposely two-dimensional, almost completely lacking shadows. Each object is outlined, giving it a youthful, cartoon-like feel. Artist’s modern, young and innovative style is contrasted by the primeval subject matter, drawing on the ancient Tibetan and Vedic mythology. Looking at the painting, I had an intense feeling of abandon. Painted in beautiful hues of blue, the painting made me feel as if I were at the bottom of the ocean, facing the Makara-snail. The snail has an ominous look, sharp bird-like claws and long beard, giving him the look of an ancient wise-man. Oblivious to the waves engulfing him, I imagined the snail slowly moving across the ocean bed, performing rituals and magic like an old shaman. Perhaps it’s his ancient features that give him the look of wisdom, the thick magnificent mane, or the strange body reminiscent of a dinosaur. The snail has an omniscient glare, as if questioning the viewer if they also knew that “Change is Constant”. Makara-snail fearlessly glides on top of the waves; he has no control over the forces of nature, and accepts change and fluidity as the only constant in life. Devoid of any possessions, carrying his shell wherever he goes, the snail has a stoic and composed aura of a monk.